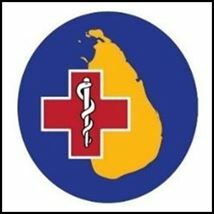 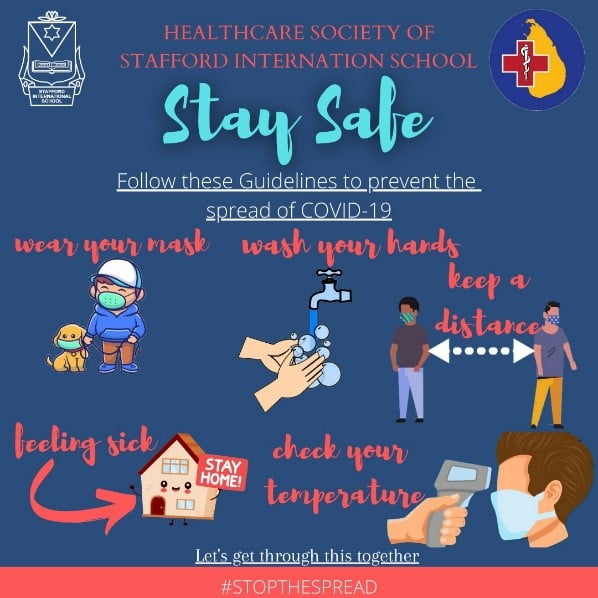 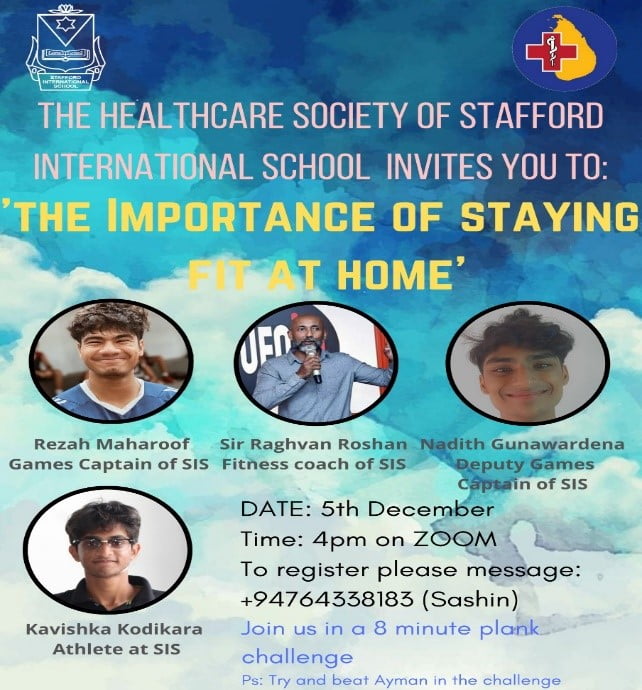 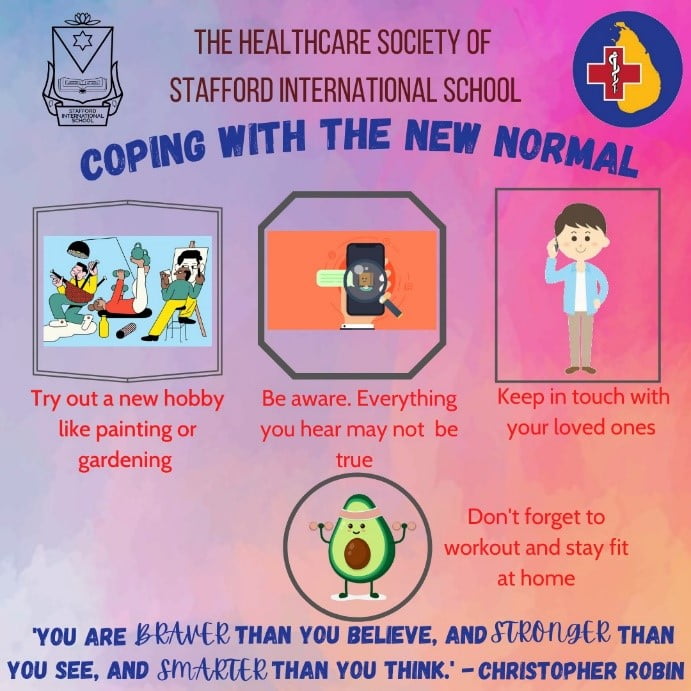 The Healthcare Society strives to provide a safer environment for our community. Our main objective this year, ‘Conquering Covid’, is an initiative taken to help spread awareness on the importance of the subject.

Phase one: Spreading awareness on how crucial it is to take adequate measures to abide by Covid-19 guidelines. Taking this in two stages we managed to share uplifting posters and an inspirational video on social media for our students.

Phase two: The goal of this phase was to keep up morale within our students by encouraging them to stay physically fit and healthy at home. During phase two, two stages were carried out. Firstly, an original poster ‘coping with the new normal’ was shared. Secondly, a Zoom conference was held with our Fitness Coach, Games Captain, Deputy Games Captain, and Athletes to highlight the importance of staying physically fit at home.

The Interact Club of Stafford International School was chartered in the year 1991 sponsored by the Rotary Club of Colombo and has hence celebrated 28 prestigious years of being part of Stafford’s diverse selection of clubs and societies. Our objective as a club has always been to contribute to the betterment of our society and country without a thought for ourselves, hence following the interact spirit of ‘service before self. Throughout its years, our predecessors have been displaying the purpose of interact through amazing projects, and we as the board of 2020/2021 have been working hard to live up to the reputation they have built, and perhaps set the bar even higher. As of June 2021, we have successfully completed a total of 24 projects.

We began our year with the theme, “create a sustained impact”. We have been determined throughout the year to take part in projects that would serve the greater good long after we are gone, through education or an organized movement. We believe that we have managed to uphold our vision to a great extent and hope to support our successors to do the same. We have always and will continue to aim to unite and serve our country for a better future.

The club was successful to stay true to its theme, “create a sustained impact”, through all 25 varied projects. As to the principle of “service above self”, each diligent board member upheld it and made sure each activity of the club was a success.

We hope we have done the legacy of this club and this interact movement justice through the projects we’ve conducted. 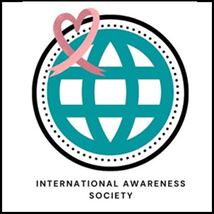 “Change no matter how small it is, is still progress”

A glimpse at a local newspaper will tell you the horror stories children face around the country. When scrolling through social media you are likely to come across a post about children who starve in nations such as Palestine and Ethiopia. Even in day-to-day conversation, someone always brings up the topics of climate change or poverty or another humanitarian crisis as such.
In a world where these unfortunate circumstances are so prevalent, we present to you the International Awareness Society; fighting to make a change, as small as it may be, because change is what we believe in.
The IAS is a society that cultivates a sense of global responsibility within its members. As our title states, we are focused on bringing awareness to issues that desperately require international attention.
When it comes to awareness, we have a grounded belief as to what it is and what it can achieve. Awareness is not simply knowing what is happening in the world. We in the IAS deem awareness as knowing and understanding occurrences in the global sphere, and working proactively to find solutions as well as build up community knowledge by sharing this information. It is not simply knowing; it is so much more.

One of our main activities is our signature IAS Crisis Alert. Making full use of our social media presence, the IAS Crisis Alerts are creative videos made by our very own club members speaking on global topics, presenting us with the facts and how we too can help in finding feasible solutions or assist in finding a way out of such issues and crises. So far, we have covered quite the multitude of topics, varying from the Farmers Protest in India, to the Humanitarian Crisis in Ethiopia, to the issues of University Ragging in Sri Lanka.

Another key project that our society has initiated is the United Nations Awareness Days series. This involves the release of posters on every UN awareness day; colourful and informative, these posters present summarized encapsulations on important topics. So far we have covered World Blood Donor Day, World Elder Abuse Awareness Day and World Day to Combat Desertification and Drought amongst a few.
Our most recent project was the “Brighter Tomorrow” competition. Our members were presented with the opportunity to relay their take on an ongoing global issue, providing us with the facts and an overview. The catch was to also present us with a solution that they have come up with in order to combat this. The criteria tested feasibility and originality, and we are proud to say that our members did justice to our scope of a “brighter tomorrow”.

The activities and projects we do in this club have built values such as leadership and confidence, and truly honed our skills and capacitated us in so many ways. However, we believe that the work we do here has truly furthered us as individuals, making us far more empathetic and worldly. Learning about and understanding prevalent topics in the world have opened us up to the reality of the word, but also given us a golden opportunity to do something about it. Knowledge is power, and understanding all this is the stepping stone for us to make an impactful change. The IAS has given us hope for a better world, and given us the drive to work to build that world we see.
“Change no matter how small it is, is still progress. One small step makes us one step closer to the main goal. The IAS is a club which through its work will at least try to create an ideal environment and revitalize the weary world back from its ashes and to its former glory.”

Penned by the president of the IAS, this is our foundation, and the motive behind all that we do. It has struck a chord with all our members, and we hope that it touches you too.

Follow us on Instagram (@internationalawarenesssociety) and text 0754926195/0763458199 to join us on our journey; it will most certainly take you beyond the horizons you know. 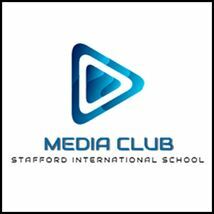 From working with nearly all the clubs and societies in school, being a central hub of information of school activities, to completing projects and events, the Media Club of Stafford International School has certainly had an exciting year.

As a club focused on serving its members and its school, the year 2020/21 has been one that taught the club as a whole about responsibility and working in the face of adversity.

The club’s first order of business was restructuring the club itself at the start of the year. The club is now split into 5 departments, each covering 5 different aspects of Media: Print Media, Broadcast Media, Internet Media, Photography Media, and Project (planning and organizing). The goal of this was to make the club’s work more efficient, as well as to teach students about each avenue in more depth. Members are advised to be a part of a maximum of 3 departments in order to ensure they can make the best out of their time and tasks.

Although Covid-19 posed challenges for the work to be carried out by departments such as Photography and Project, we believe that the departments still contributed to more efficiency, and really helped keep things up and running for the next project we came up with.

The Newsletter, ‘The Star’, is one of the Media Club’s prime achievements. Although a change in a format meant that its release had to be halted temporarily at the beginning of this year, the newsletter kept everyone in the loop about club activities and updates on school, especially in a time where this could not be communicated in person. The newsletter has returned in a new format, and we eagerly wait for all of you to see the work our talented members do as the Media Club continues to release its news.

We also held a mini-project titled ‘Beat the exam stress’: quite self-explanatory. We put out posters made by the Internet Media Department that included tips and tricks compiled by the Project Department students to keep online exams as easy-going as possible for our student population.

The next project really embraced the spirit of what is celebrated. ‘Christmas Magic’ was a joint project between the talented members of the Drama Club and the Media Club. The Drama Club filmed their segments of 4 seasonal skits and we assisted them in putting together the videos, trying to inculcate the spirit of drama as best as we could over an online platform. With the combined efforts of heart-warming performances and diligent editing and compiling, the project can certainly be deemed a success.

The biggest event hosted by the Media Club is certainly the Founder’s Day celebrations. As the school commemorated 61 years, the Media Club decided to celebrate with a full-scale online event. Interviews were conducted with the Principal, the Academic Director and the Head Prefect over the course of the school day via Instagram live, with students sharing their favourite moments in school on their stories, alongside nostalgic memoirs and hopeful messages from past and present Staffordians. The day truly brought the whole school together, despite the distance from our Alma Mater itself.

Moreover, we have also been embracing our identity as the Media Club, using our resources to help give publicity to clubs via our Instagram page. Assisting in and celebrating the amazing projects and crowning achievements of the clubs and societies in school truly has grounded us as a club, even if we are only a small part of the journeys that our students are on.

Finally, the club will be ending 2020/21 with department-based workshops to teach and inculcate key skills required in the field of media. From photos that speak a thousand words, to fewer words saying more, we are certain that our students will be able to use these skills in whatever they endeavour to do in the future.

Although the year has not been as productive as hoped, it has been more rewarding than precedented. We would like to thank our Staff Coordinator, Ms. Michelle Herft for being a constant source of wisdom, guidance, and fun – much of what we did would not have been possible without her.

If you would like to join the Media Club, WhatsApp 074 145 2252. We would love for you to be a part of all the amazing work and we are sure you will learn something along the way!